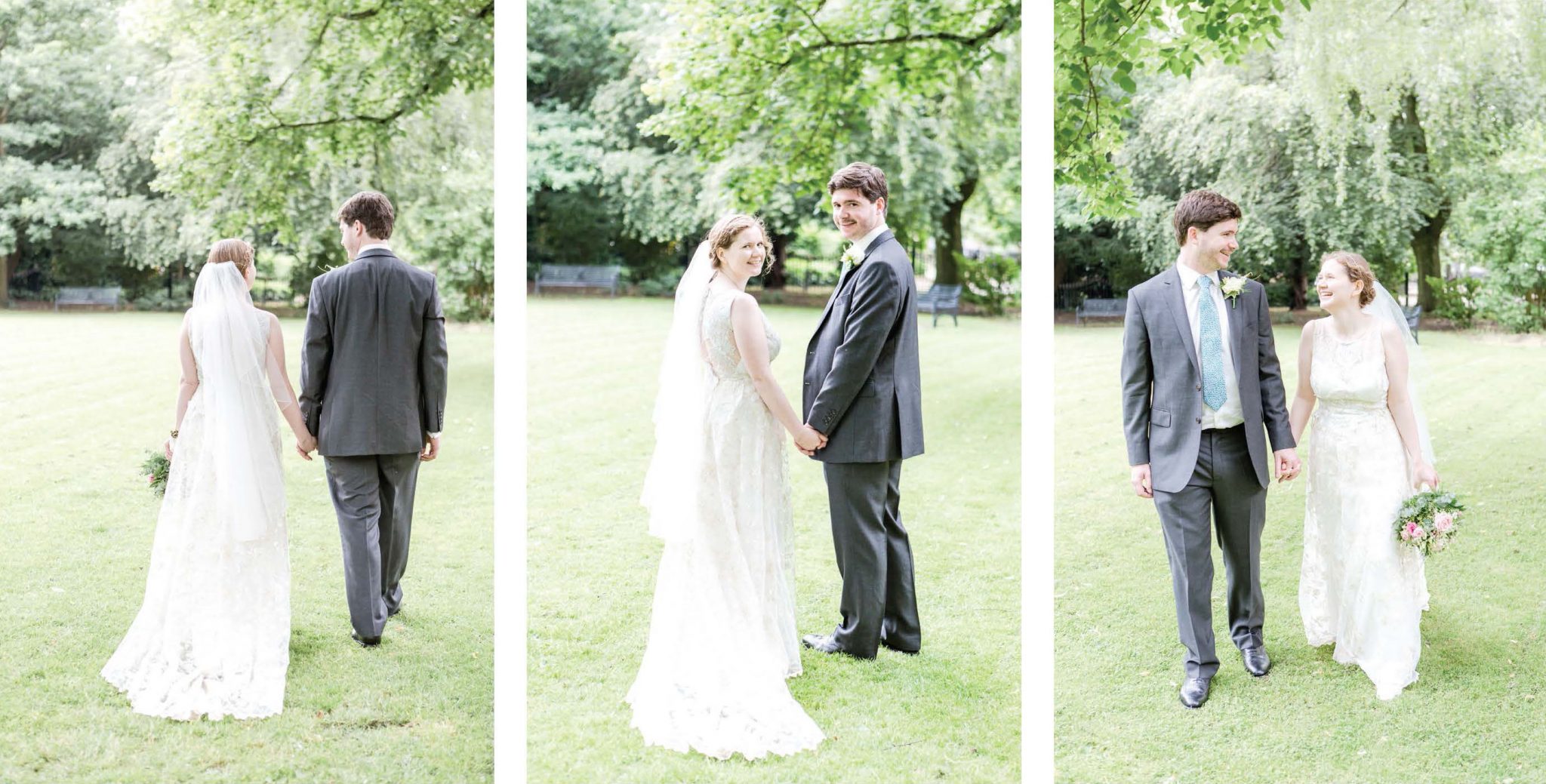 I arrived at St Stephen’s United Reformed Church in Leicester on a lovely summer day and the atmosphere was already excited and starting to build.

Fiona attended St Stephen’s when growing up and her parents are still members, so it holds a special place for her. Rev Lynn Fowkes, who led the wedding, and Rev David Gardner, who baptised Fiona, greeted me and it was clear that the wedding they were about to officiate was special to them too.

Jake and his youngest brother Tom, who was his best man, welcomed their guests at the church doors; his school friend Stephen and Fiona’s brother Kyle acted as ushers and the huge church hall began to fill and come alive with laughter and chatter in anticipation for Fiona’s arrival.

Fiona was driven to the hotel next door by her father Dave, who then walked his daughter to their church. A school friend Nat, who had helped Fiona get ready in the morning, accompanied them. The bride wore an Eden dress by Claire Pettibone, which was purchased from Ellie Sanderson in Oxford.

“After trying on various heavy, restrictive dresses that weren’t me at all, this dress was a breath of fresh air! I loved all the beautiful detail and the fact that I could dance in it. I wore it with a pair of Repetto shoes. I didn’t chose them with this in mind, but I liked the fact that the dress came from America and the shoes came from France – my mum is American and I studied French at university, so that was fun!”

The excitement was written all over Fiona’s face as she walked up the church steps, after a short greeting from Rev Lynn Fowkes, Dave walked his daughter down the aisle to marry Jake.

Fi and Jake have been together for 7 years, having met in their first year at university. They got together just in time for Fiona to go to France for a year, but luckily the long distance didn’t faze them and their relationship blossomed. Their relaxed approach to life was reflected through out their day as well. They went for a ‘leafy’ theme with lots of green and touches of gold and pink to reflect their relaxed, natural, summery wedding.

They also wanted to involve as many people as possible throughout the day so several close friends and family members played important roles. From Fiona’s brother Kyle and Jake’s dad Dave delivering the readings. Rev David Gardner blessing the marriage. To Fiona’s friend Stephanie playing the violin during the signing of the register, and their friend Jemma creating the decorations for the reception. The delicious carrot cake was made by their friend Amy who managed to transport it safely all the way from Cornwall!!

After the ceremony the wedding party walked over to the Belmont Hotel for afternoon tea and scones and of course some bubbly to start the celebrations. They then moved on to College Court for the evening reception, which had a beautiful garden where everyone was able to sit and relax into the evening to enjoy Fiona and Jake’s summer wedding. A BBQ meal was served in the main reception hall before Fiona and Jake said their thank yous to everyone involved in their day.

The party was then started by the first dance to ‘Nothing But Love’ by James and then The Burgundys, a three-piece band, got everyone up and dancing, before finishing off the night with a DJ set, which brought to an end a truly memorable day.

“We are delighted with the photos Joss took and by the work she did throughout the day seeing opportunities for photos and getting together the group shots that we wanted. She was also just a pleasure to have around!”

The best decision I made for my business 💕 epic

How gorgeous are these handmade blossom trees!! I

The lovely @caitlinferg91 in the bridal suit @hort